​In the depression year of 1932, Michigan alumnus Bob Hiller brought together some local Big Ten alumni for informal luncheon meetings in the Biltmore Hotel. The camaraderie caught on: Early in 1933 the Big Ten Club was formally established to spread the good fellowship generated at the luncheon meetings. The Club grew steadily, even during the wartime years of the early 40's, and in 1946 the signing of the Rose Bowl pact sparked an enthusiastic increase in membership and breadth of Club activities.

​Beginning in 1946 our annual Dinner for Champions welcomed and honored the visiting Big Ten football team selected to appear in the Rose Bowl on New Year’s Day. For a number of years the Dinner was held in the Biltmore Hotel. From 1966 through 1988, the Dinner was held at the Hollywood Palladium and from 1989 through 1994 it was held at the Century Plaza Hotel. Bob Hope headlined the entertainment for 43 years and Dinners featured Pia Zadora, Norm Crosby, Joe Pesci, Alan Thicke, Don Knotts, George Kirby, The 5th Dimension, Barbara McNair, Tom Lasorda, Tom Dreesen, Rhonda Shear, Fred Travalena, Joey Villa, The Pendragons and many others.

The Big Ten Club is a great way to enjoy the camaraderie of Big Ten schooled folks at various events and functions. Plus with our long standing association with the Tournament of Roses, Big Ten Club members enjoy access to special private events and allotted Rose Bowl Tickets.

University of Chicago was one of the original schools in the Big Ten Conference from 1896-1948. Chicago has remained a part of the Big Ten Club since our Club’s 1933 inception. 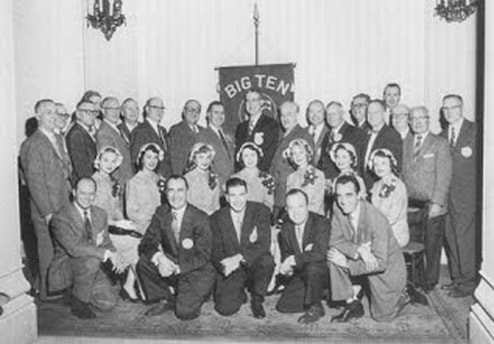